New to the MicrobioME Project? New to Microbiome Bulletin? If so, check out the links below, otherwise, read on!

This third week of the “Prebiotic-Probiotic Case” testing period also marks the final one. I wasn’t sure how quickly my digestive system would adjust to what was basically 30 extra grams of fiber a day (on top of the 60 I typically consume), about 24 grams of which was in the form of prebiotics. (That additional fiber was some additional non-prebiotic insoluble fiber I added to balance things out a bit.)

However, my digestive system did settle into a “new normal” if you will, after some initial and expected adjustments which you can check out from Week 1 and Week 2.

I did collect my sample on a Saturday rather than a Friday as I usually do, but otherwise this was a pretty normal week for me, and I sent the sample in to Ubiome for testing that same morning. It should be about three weeks before I get the results back. 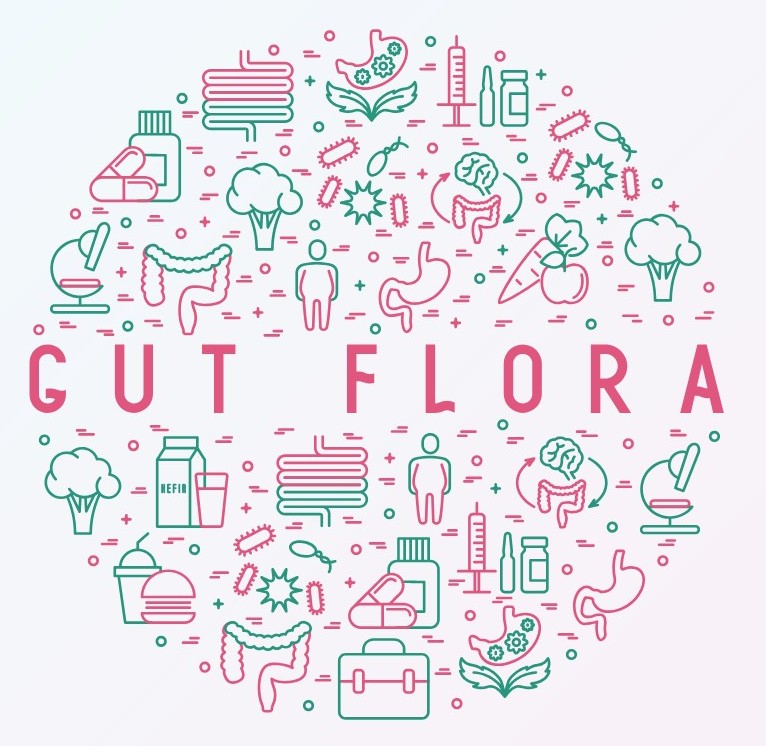 You’ll note below in the details that my activity level was off a bit this week but that was because of a particularly slothful weekend, but again, since I sampled Saturday morning, and my stats were pretty constant at that point in time (I saved that data for when I get the test results back), the sampling period should remain valid.

One other thing of note, I did in fact get my test results back from Ubiome for my “Probiotic Case,” late Friday evening but there was some important data missing. I made an inquiry into the company to see if they could clear that up, and they responded quickly Monday morning and I now have everything I need, it will just take me some time to go through it.

As a reminder, that Probiotic Case was intended to measure what effect, if any, a fairly intensive supplementation routine of probiotics might have on my microbiome, not just regarding the presence of the probiotics themselves, but what other tangible results might be measurable such as overall diversity.

I don’t want to draw any final conclusions before I’ve had a chance to go through all the data in detail (and compare it to my initial Base Case), but I can share with you that there were many measurable, and in some cases, dramatic, changes. And they don’t yet appear to be random, but rather exactly what you would expect if probiotics really do what they purport to do.

But again, I have to withhold final judgment until I get through all the data.

And to review, I maintained this intensive probiotic routine throughout the “Prebiotic-Probiotic Case” period (as the name suggests) just ended to see what the addition of prebiotics might do together with the probiotics.

So, yes, another three weeks or so of 90-plus grams of fiber a day. But I have to say, I’m feeling very good about that. This is a purely subjective assessment, I know, and I’ll have more to say about it when my Ubiome test results are in and I prepare the full report, but I believe this is agreeing with me.

After that, I might do another Base Case in which I supplement with nothing, see what happens.

Not looking forward to that, frankly, but it would allow me to put together a very interesting overall report on my experience throughout these various scenarios.

Oh, and it won’t end there, I have a lot to test going forward!

Regardless, assuming no unexpected illness or other intervening event, I expect this new Prebiotic Case I’ve just begun will last another three weeks like the others.

This past week was pretty straightforward. Since I knew there was a good chance I’d be collecting a sample for Ubiome testing at the end of the week I was particularly diligent about sticking to my probiotic and prebiotic supplementation routine, and in fact, did not miss a dose.

My sleep was a bit off, but not materially I don’t believe.

Otherwise, as you will be able to tell from the detail below, a pretty standard week in terms of holding the other variables reasonably constant. This is important if my test results and personal impressions are to have any validity at all.

Regarding those personal impressions, my overall health is fine, and as I mentioned, my digestive system settled into accommodating the extra fiber pretty quickly.

There were some changes from prior to this infusion of prebiotic fiber, about which I’ll have more to say once I get the test results back from Ubiome and I do a full write up (again, probably about three weeks away).

On to this week’s details:

I had mentioned last week that I had checked with Life Extension Foundation regarding their CFU counts, and it turned out they were actually better than what you would think from just reading the labels in that their supplier includes an “overage” of 50% of CFUs at the time of manufacture so that the number listed is actually what you can expect at expiration.

I adjusted that accordingly based on the two I was specifically asking about, but I had neglected to ask about the Immune Health I also take (that was my oversight). It’s almost certainly the same as with the others, but I’m waiting for confirmation before I change the numbers in the table below. 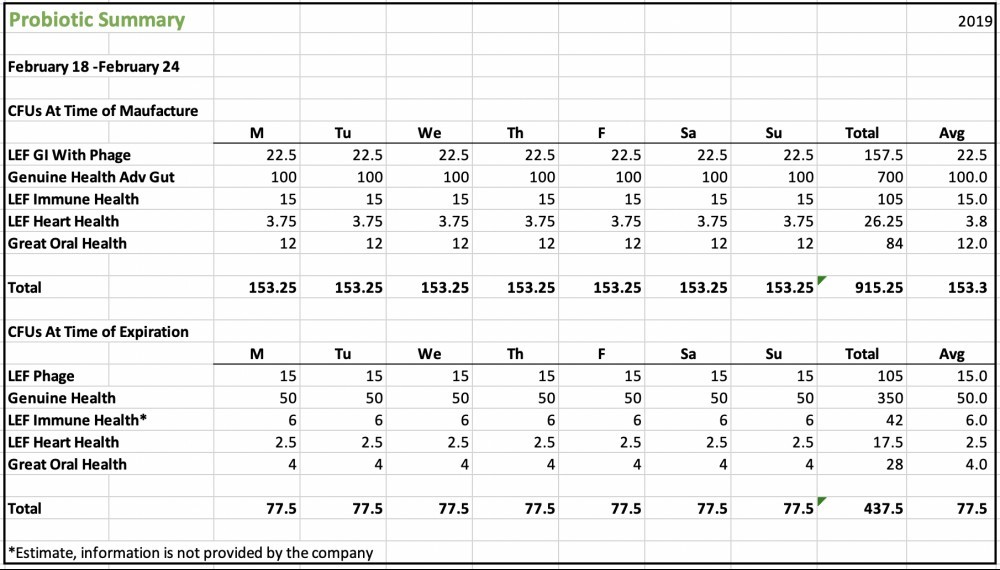 Note that I provide CFU totals both at the time of manufacture and at expiration (estimated in cases where the manufacturer does not specify). I don’t typically take probiotics too close to their expiration and so you can assume my actual intake is closer to the date of manufacture, so for the past week I would assume my CFU count is probably at least 100 billion CFUs a day.

I also consume around 8 ounces of Greek Yogurt a day pretty reliably and while that would add CFUs the numbers can vary and it’s not always clear how many survive the trip to the colon and for those reasons, I do not include them in the supplementation table above, but note it here to be thorough.

No changes here either. I held steady at the products and quantities I had settled on last week.

I would like to revisit an issue involving the fiber in the LiveKuna Banana Flour I went over in detail last week. Green banana flour contains a prebiotic known as “resistant starch” which as I mentioned last week only recently has been granted “fiber” status by the United States Food and Drug Administration (FDA). This is an important development as resistant starch (often referred to as “RS”) has not before been permitted to be listed as a fiber on nutritional labels in this country.

I reached out to the company to find out what the new labels might look like, and they gave me some preliminary feedback which is reflected in the table below (and last week). I’m not including the other fiber in the banana starch (which is currently listed on the label) as only the resistant starch (again, soon to be considered a fiber officially) is considered to be a genuine prebiotic. 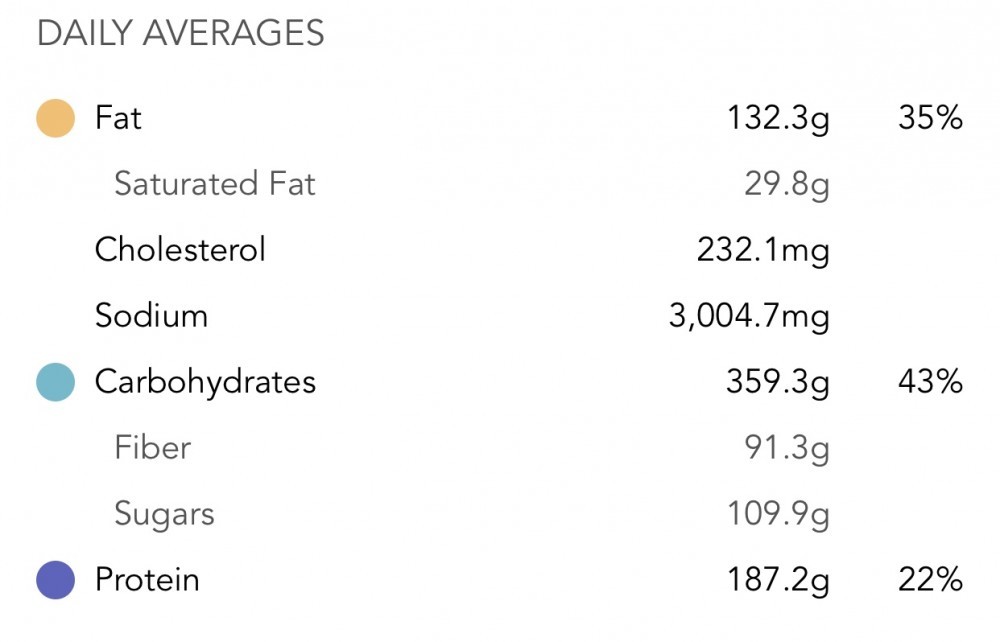 Very little change from last week, so it appears I’m successfully holding my diet pretty steady. Fiber was up a bit, but that’s just part of the normal variance in my diet.

My fat intake remains majority plant-based (if only by a little), nuts and seeds and plant oils. Close to half my protein comes from shakes and bars, and are primarily whey, casein, and plant based. I do eat meat most days. This week was a mixture of fish, beef, and chicken, so fairly standard for me.

Going back to my Base Case, you will notice that my carbohydrate intake is up a bit, but that should not be surprising given the 30 extra grams of fiber I’m consuming as part of the Prebiotic-Probiotic Case (fiber is counted as part of total carbohydrates).

I continue to eat about a cup of blueberries a day, plus some blackberries. I also have at least one large salad in the afternoon and vegetables with dinner, sometimes lunch.

Sleep was still off a bit this week. Ideally I like to get closer to 6 hours and 40 minutes, but have been hovering between 6:20 and 6:30 lately. Not enough to invalidate my results I don’t believe, but I do need to do better here. Basically, I, like pretty much everyone, should get more sleep! On the plus side, I did manage to do better than last week, if only by a little.

Noticeably reduced from prior weeks, but as I noted above, this was a result of a particularly non-active weekend! (Lots of writing.) I took my sample for this case Saturday morning, so this will not have any effect on those results.

As a reminder, I teach regular group fitness classes as part of my wellness business (mostly during the week) and do some personal training so my activity level is usually pretty high.

I’m still keeping my weight within a pretty tight range. This is a challenge this time of year as I have in the past typically put on a few pounds during the winter. I’m watching it very carefully this time given the effect it can potentially have on the microbiome and thus my test results, and I’m trying to keep the potential variables as constant as I can while I test.

Please note I don’t usually weigh myself on weekends in part because my schedule is less structured so it is more difficult to get a good weight measure at the same time, under the same circumstances, so I just don’t bother as it might be misleading. Regardless, any material changes would show up Monday morning to be sure, and so far that hasn’t happened!

Once again, I’m very excited to get through the hard data I now have from Ubiome regarding my Probiotic Case, but that will take some time, so keep an eye out for that report later in the week (it might slip to the weekend, we’ll see, I have some other things I want to write about this week). Based on what I’ve seen so far, it should be of great interest to anyone contemplating taking probiotics.

In the meantime, I’ll be waiting on the results from the now just-completed Prebiotic-Probiotic Case.

As I mentioned early on, I have already started the next experiment, the “Prebiotic Case” in which I am going to wean myself off the probiotics I’ve been taking, going cold turkey this week on all but the Genuine Health Probiotic and the Great Oral Health Probiotic. After that, I’ll start eliminating those as well, as much as I don’t want to as I find those particularly effective!

Throughout this coming period, I’m going to stick with the current prebiotic routine, that together with my regular diet should have me continue to consume about 90 grams of fiber a day.

Thanks for checking in on how things are going with the MicrobioME Project, and please feel free to add any comments or questions below.