Week One of the Base Case 2 Testing Period

Back to where we started. The Base Case, this time, “Base Case 2.”

But first, a status update on the various test cases (changes from last week are underlined.)

Not much changed from last week other than I’ve actually begun Base Case 2. Apologies for the continued delay in finishing the write up for the Prebiotic-Probiotic Case. It’s almost finished.

This was the week I rapidly drew down on the 24 grams of prebiotics I had been taking for the Prebiotic Case. My goal was to get to zero by the end of the week, which I met. The minimal probiotics I had added back to ease the transition (including eating yogurt which naturally containing probiotics), were also eliminated during the course of the week.

Regarding my personal (and wholly subjective) observations, funny thing about that.

I had been thinking lately that I hadn’t really noticed much of a change the past few weeks while I was still taking all the prebiotics. That’s fine, I am not specifically trying to address a problem or discomfort. I am primarily interested in general health with a long-term view. Kind of like eating vegetables. I don’t expect to achieve immediate or miraculous results, but hopefully eating vegetables will help me stay healthier, longer, as I grow older.

However, as I write this, several days after having ceased all supplementation, I actually did not feel as good as I did the weeks before. I can’t quite put my finger on it. Energy. Sleep. General mood. You can get used to a “new normal” as I put in my review of the Genuine Health Probiotic, that is, you get accustomed to however you are feeling, absent some particular problem, so you don’t necessarily think that you could feel “better.”

We’ll see going forward. This is truly and deeply subjective, but I miss my prebiotic fiber, and I miss my probiotics and I think I might have been materially better off, overall, when I was taking them.

The data below is for the full week through Sunday.

I briefly added back the Great Oral Health Probiotic lozenges after I had collected my sample for the Prebiotic Case. My mouth just hadn’t felt the same and since I wasn’t going to be collecting a sample for this new Base Case for nearly three weeks, it wouldn’t do any harm. I completely ceased supplementation after Wednesday.

I had also added back yogurt, one 6 to 8 oz. serving of plain Greek throughout the week. I typically just footnote or otherwise disclose my yogurt consumption as part of my probiotic table as the probiotic organisms in yogurt can vary immensely. The numbers are not tightly controlled as in a capsule, and it’s not always clear how many survive past your stomach. Still, it’s a materiel component of my probiotic intake, and I will not have any more until the end of Base Case 2 (scheduled for two more weeks). 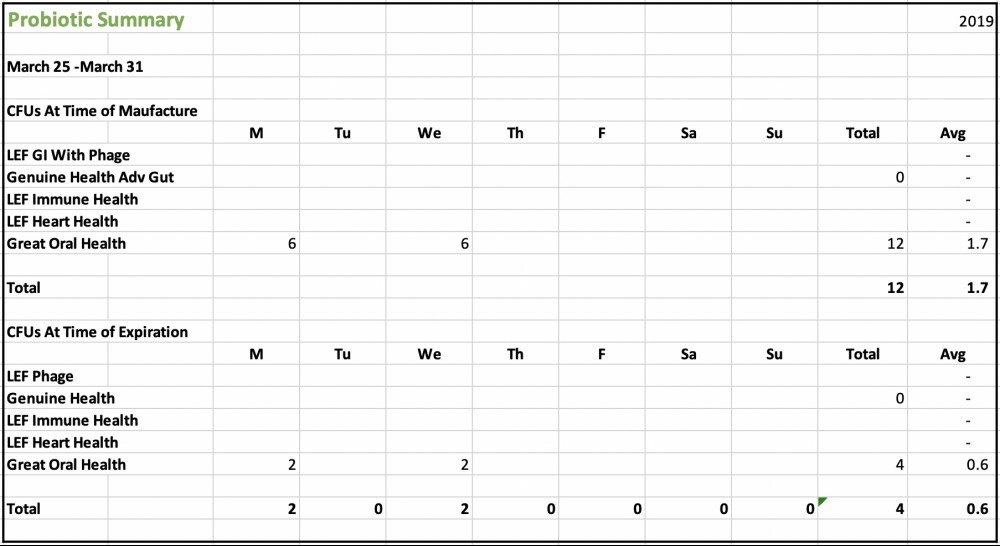 I provide CFU totals both at the time of manufacture and at expiration. I don’t typically take probiotics too close to their expiration so you can assume my actual intake is closer to the date of manufacture.

(Note that the CFU counts at manufacture and expiration for the Life Extension Foundation “GI With Phage,” “Heart Health,” and “Immune Health” probiotics were provided directly by the company in response to an inquiry I had made and are not yet reflected on their labeling. This is information you are unlikely to find anywhere else.)

A rapid reduction here, even more quickly than I had planned. These were large quantities of prebiotic fiber and I wanted to make sure as best I could that I would be free of their impact by the time I tested my microbiota again (three weeks total for this case). I’m going on a short trip (more on that in the future as I might make a case study of it) so I want to be able to finish up this second Base Case by then.

A couple of things to note. First, I did not and will not cease taking the psyllium. While I and others argue that it is a legitimate prebiotic, many reject that claim outright. I have also been taking it for decades. It is truly a deeply integrated part of my diet and genuinely a part of my personal “base case” lifestyle, and in any case, is a mild prebiotic at best. This is consistent with the first Base Case.

Second, I did eliminate the LEF Prebiotic Chewable this time which I had not done in the first Base Case. I have been taking it for some time, but not nearly as long as the psyllium and it occurred to me it is a true, inarguable (almost) prebiotic in that it contains xylooligosaccharide (XOS). It was only 1.4 grams, but I thought it masw more sense to do away with that one as well for this second Base Case. 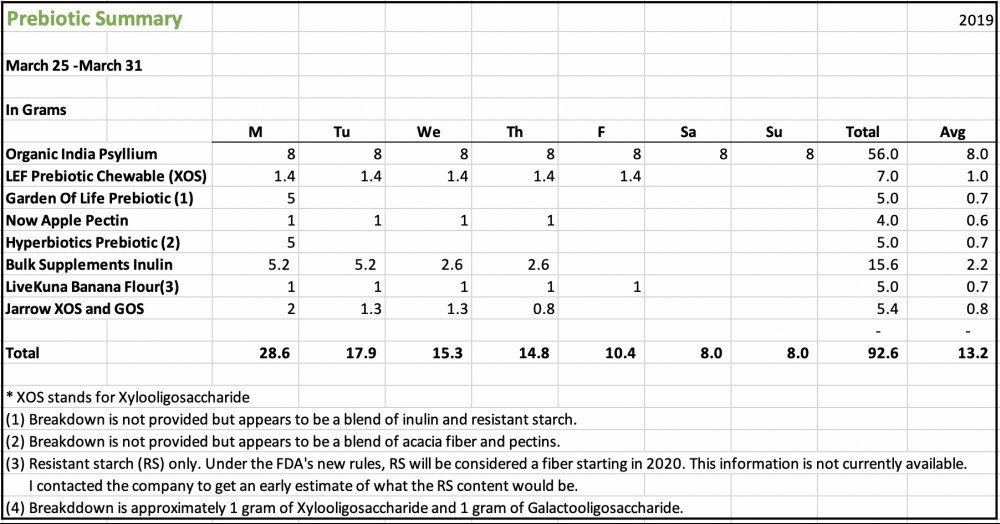 (As I’ve mentioned in earlier MicrobioMe Snapshots, green banana flour contains a prebiotic known as “resistant starch” (RS) which only recently has been granted “fiber” status by the United States Food and Drug Administration (FDA). This is an important development as RS has not before been permitted to be listed as a fiber on nutritional labels in this country.

I reached out to the company to find out what the new labels might look like, and they gave me some preliminary feedback which is now reflected in my prebiotic tables. The tables include this RS only, as the other fiber is not considered prebiotic.) 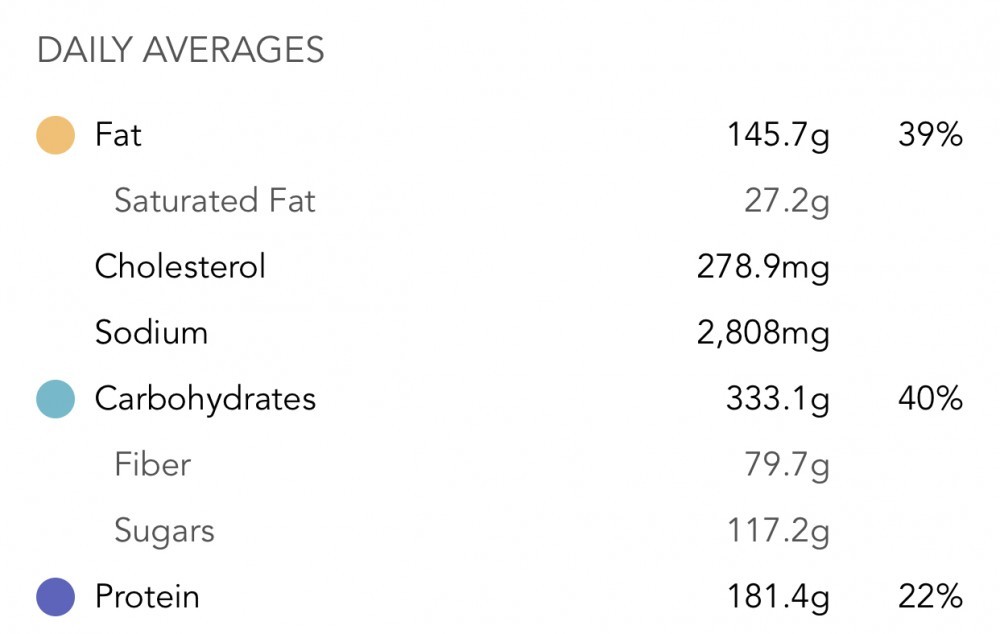 Macro components held steady, within a percentage point or so of previous weeks. You’ll note fiber levels came down materially, primarily as a direct result of my eliminating my prebiotic supplementation. I had been running at about 24 grams a day the week before but by the end of this week had eliminated all of it (not including the psyllium discussed above).

My fat intake remains more plant-based than animal based (but just barely), with nuts and seeds and plant oils. Close to half my protein comes from shakes and bars, and consist primarily of whey, casein, and various plant-based combinations including soy, brown rice, hemp, and even some pumpkin. I do eat meat most days. This week was primarily chicken and fish. (No beef, I’m trying to pull back on that.)

I continue to eat a lot of blueberries, blackberries and raspberries amounting to between a 1 and 2 cups in total. I also have at least one large salad in the afternoon and vegetables with dinner and lunch.

Sleep slipped a little this week, but still within my admittedly arbitrary target of 6 hours and 40 minutes. 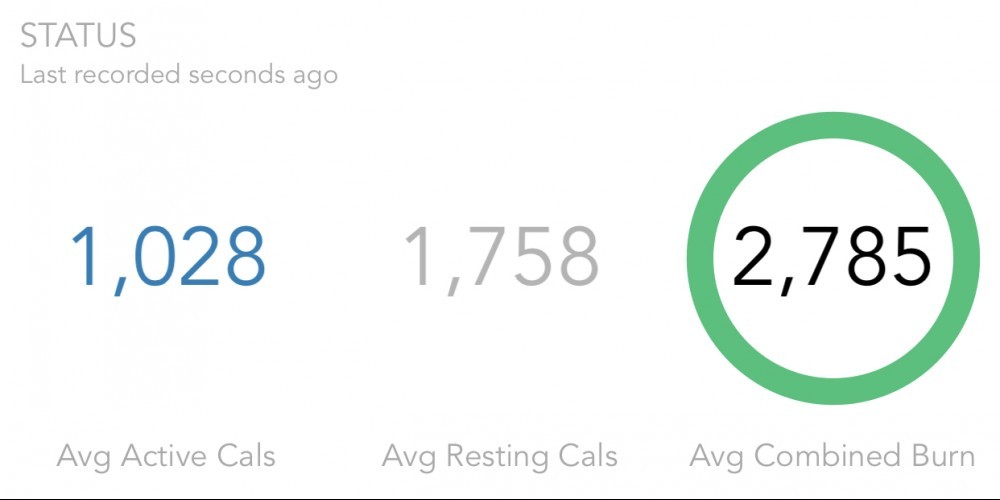 My target is to burn between 2750 and 2850 calories a day. I was a little short the week before which I believe was due to the lingering effects of a head cold that might have slowed me down a bit in general, but things were back to normal this past week.

For new readers, I should note that I am a group fitness instructor and personal trainer (part of my health, fitness, and wellness business). I remain otherwise active and pretty high energy, walking our dog, playing with my son, and as a rule rarely sitting for very long in one stretch.

Pretty typical week. Starts off a little high coming out of the weekend when I am less active and is whittled down during the week.

While I don’t typically weigh myself on weekends, given that my schedule is usually less structured and so it can be difficult to get a valid weight measure at the same time, under the same circumstances, this weekend I managed to get a credible weigh-in on both Saturday and Sunday. Here you can see the fairly dramatic results of not running around as much but basically eating the same. It’s not usually this clear cut, but there you have it!

Thank you so much for reading! Since I’m down to zero supplementation, I’ll just hold it right here for two weeks when I can hopefully close out this second Base Case. It should be fascinating to see how it compares to the original. Ideally I want to do a few rounds of this to try to better validate the test results, with a few curve ball tests thrown in here and there as well.

An as always, please feel free to add your comments and questions below!