New to the MicrobioME Project? New to Microbiome Bulletin? If so, check out the links below, otherwise, read on!

Quick review of the overall status of the MicrobioME Project:

The first “Base Case,” which was intended to establish the general state of my microbiome sans any supplemental intervention is completed, the results of which can be examined in our Base Case Ubiome Test Results post. The “Probiotic-Only Case” phase, which is intended to identify changes in my microbiome as a result of intensive probiotic supplementation, is completed, but I am still awaiting test results (I should have those within a week).

Which brings us to Week Two of our “Prebiotic-Probiotic Case” Testing Period, which is intended to hold everything else constant, including the probiotics I was taking, to see if the addition of intensive supplementation with prebiotics will result in any identifiable changes to my microbiome.

I have not yet decided if this phase will run one or two more weeks. It’s not so much a matter of how long it takes for the microbiome to be affected, it’s generally understood to change rapidly (even with a single meal), but rather a matter of how quickly I was going to be able to ramp up my fiber intake without incurring massive discomfort. (More on that below.)

Keep in mind, we’re talking about a material increase in my fiber intake over a relatively short period.

I’m hoping that conducting multiple tests, and returning to earlier scenarios, will help to better validate the results over time.

I did an overall credible job holding the other variables constant this week (details below) although my sleep was off more than I would have liked, but I don’t think I did anything that would materially affect my results, certainly not at this stage.

I moved a bit more slowly in adding additional prebiotics to my diet. I actually had quite a bit of additional discomfort earlier in the week when I added a quarter cup of green banana flour to my supplementation for the “resistant starch” it contains.

It occurred to me that the problems were not so much the fiber and resistant starch (2 grams of each, more on that in the detailed breakdown below) but simply the fact that I was consuming a lot of basically raw banana flour. When I cut back to an eight of a cup, things settled out just fine.

In fact, even with the additional prebiotics, things are, as I write this, much better. My system has definitely adjusted well to the additional fiber.

Beyond that, I continue to feel great. I don’t believe I could say I feel noticeably “better” compared to before I started taking the prebiotics, but I am going to withhold judgment on that until I’m done with this phase. At least one more week to go. I am not at this point inclined to add any additional prebiotics, but I might still toy with the quantities a bit.

On to the details:

I kept these constant this week, although careful readers will note that I increased the CFUS for the LEF GI with Phage and the LEF Heart Health. I did not increase what I was taking, but rather I had asked the company some time ago if they had an estimate of how many CFUs the capsules would have remaining at expiration as the bottle had indicated the number listed was as of the date of manufacture only.

I heard back this week after they had checked with their supplier and it turns out that the supplier in fact includes an “overage” of 50% of CFUs at time of manufacture so that the number listed is actually what you can expect at expiration.

I suggested they change their labeling to reflect this as that is quite a bit better than what is indicated now. I suspect the same is true with the LEF Immune Health, but want to confirm that first before I change the numbers there. 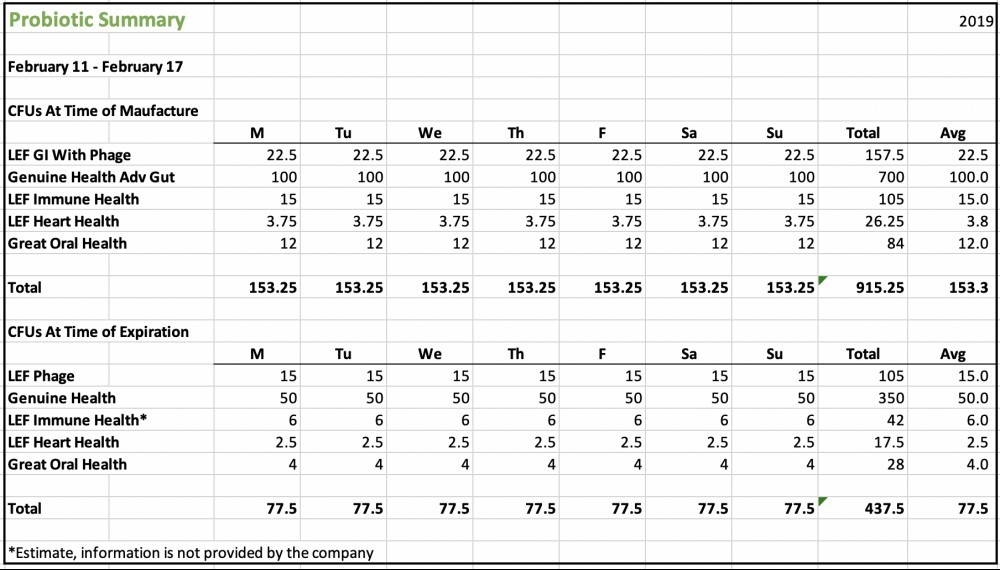 Note that I provide CFU totals both at the time of manufacture and at expiration (estimated in cases where the manufacturer does not specify). I don’t typically take probiotics too close to their expiration and so you can assume my actual intake is closer to the date of manufacture, so for the past week I would assume my CFU count is probably at least 100 billion CFUs a day.

I also consume around 8 ounces of Greek Yogurt a day pretty reliably and while that would add CFUs the numbers can vary and it’s not always clear how many survive the trip to the colon and for those reasons, I do not include them in the supplementation table above, but note it here to be thorough.

For my total fiber intake, see “Diet” below. This is specifically for prebiotic supplementation. Not all dietary fiber is considered prebiotic.

After having added four new sources of prebiotics for a total of 14.7 grams of prebiotic fiber a day last week, I introduced only two new sources this week and increased one resulting in a net increase, towards the end of the week, of 8.2 grams a day.

The one existing prebiotic I increased was the Inulin. That’s considered something of a bedrock prebiotic, and while I was sure I was getting a fair amount in a couple of the blends I was taking (not to mention from my diet) I wanted to bump it up, and so added about 5 grams a day.

The first of the two new prebiotics was LiveKuna Banana Flour. This is a slightly complicated story. Green banana flour contains “resistant starch” (RS), a carbohydrate resistant to digestion in the human gut and a relative newcomer in terms of being recognized as a prebiotic. However, the 2 grams of fiber on the label refers to other fibers, as RS is not yet considered a genuine fiber under current labeling guidelines.

That is about to change. The FDA’s new guidelines released only last week are going to allow RS (among others) to be listed as part of the fiber content in a serving. That information is not, however, readily available, so I reached out to the maker, LiveKuna, and asked.

They responded quickly and based on their initial internal research, they believe they will be able to list 2 additional grams of fiber on their labels once those rules go into effect early next year. That is the quantity I recognize below.

Please note, I reduced my intake of the green banana flour in half towards the end of the week as I was having some gastric upset. I believe it was just too much raw flour at once rather than the fiber. Once I reduced it, those symptoms dissipated, and in fact the gas I had been experiencing the prior week from all the additional fiber had also largely settled down.

Basically, my system, including presumably my microbiome, has adjusted for the most part.

The other new prebiotic is Jarrow XOS and GOS, which stand for xylooligosaccharide and galactooligosaccharide. I was already taking some XOS from the LEF Prebiotic Chewable, but wanted more, and I wanted to add some GOS, so this seemed like a good solution and has not caused me any discomfort. 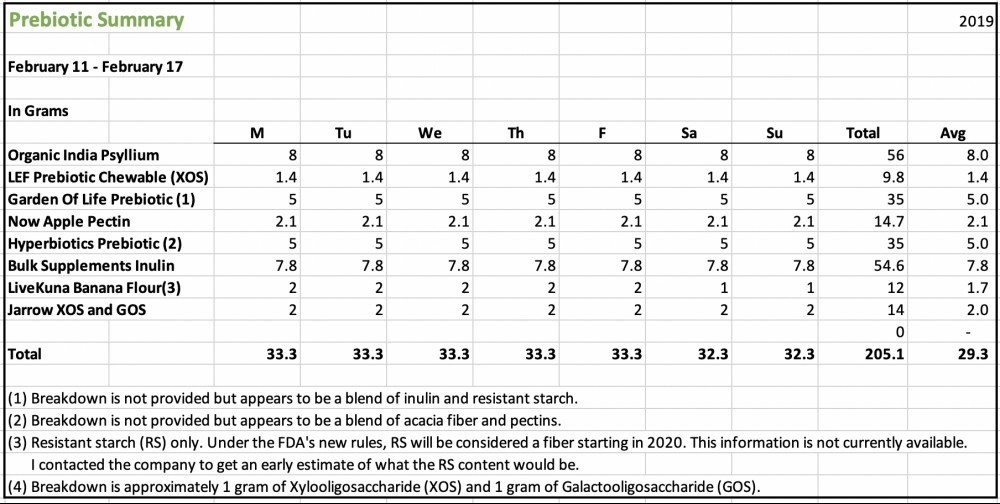 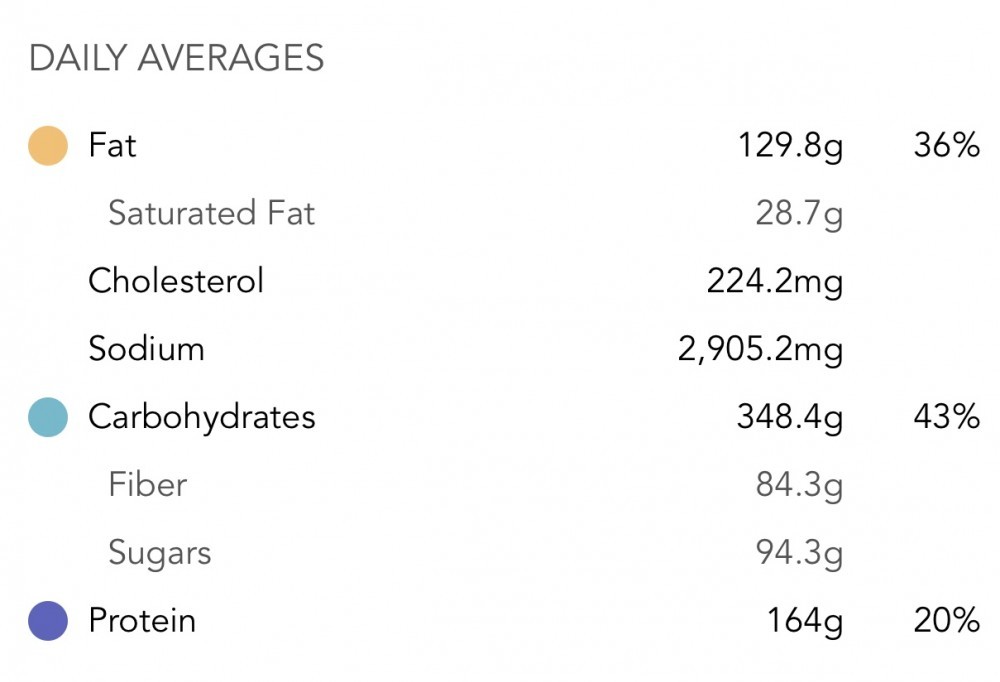 Very little change from last week, so I’m holding my diet pretty steady. I was surprised that my overall daily fiber intake only increased by about a gram, despite having added over 8 grams in prebiotics, but I believe that’s just part of the natural variance in my diet from week to week. Most of those other fibers are not considered to be prebiotic so I don’t believe they should have a material effect on my microbiome, but we’ll see what this number looks like next week.

Otherwise, my fat intake remains majority plant-based, nuts and seeds and plant oils for the most part. Close to half my protein comes from shakes and bars, and are primarily whey, casein, and plant based. I do eat meat most days. A fair amount of beef this past week, which is a little unusual.

I continue to eat about a cup of blueberries a day, plus some blackberries. I also have at least one large salad and vegetables with dinner, sometimes lunch.

Pretty much a fail this week. I like to get closer to 6 hours and 40 minutes. I fell ten minutes short the week before, and another ten this week. I’ll try to do better in the next 7 days. 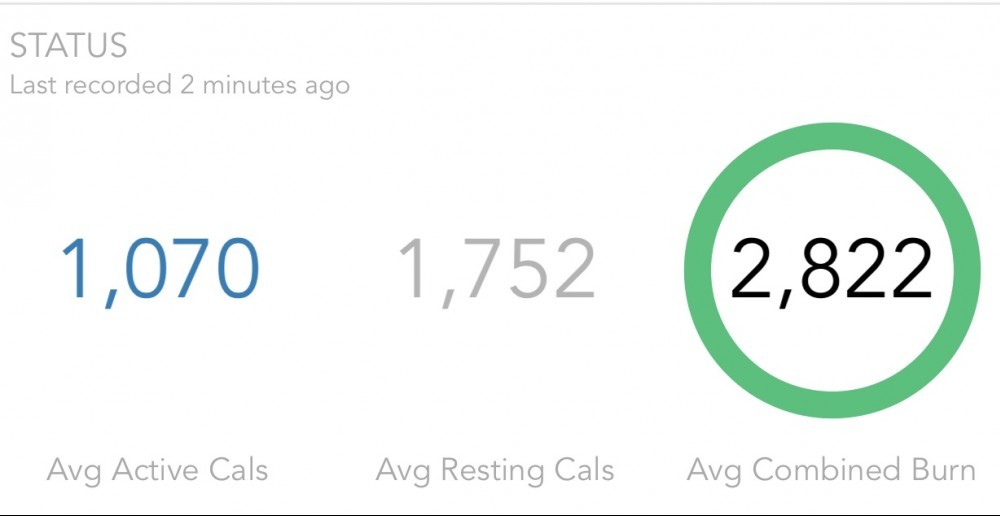 Roughly the same as last week but still a little higher than my monthly average.

I teach regular group fitness classes as part of my wellness business so my activity level is usually pretty high.

I’m still keeping my weight within a pretty tight range. This is particularly important this time of year as I often put on a few pounds during the winter. I’m making a conscious effort to watch it this time given the affect it can potentially have on the microbiome.

Please note I often don’t take my weight on weekends because my schedule is less structured so it is more difficult to get a good weight measure at the same time, under the same circumstances, so I just don’t bother as it might be misleading. Rest assured, you would notice any huge changes the following Monday.

We have at least one more week before it’s time to sample again, and I suspect the results of my Probioitc-Only test results will be in before then, so keep a look out for that.

While I haven’t completely abandoned the idea of pushing my fiber intake to 100 grams a day thus mirroring early hunter-gatherer populations, that seems a lot less important than just testing to see how this not-insignifcant amount of prebiotic loading is affecting my microbiome, so I might stand pat at these levels.

Thanks for stopping by, and please feel free to drop any comments or questions below.