Week Two of the Base Case 2 Testing Period

The second of what I anticipate will be three weeks total of another “Base Case” testing period, in which I will follow my regular diet, and general lifestyle, totally absent any extra probiotic or prebiotic supplementation at the end of which I will measure the composition of my gut flora, or microbiota, using Ubiome gene sequencing while adding my own observations.

The intent, as in the first Base Case, is to have a set of results against which I can measure the results of changing all the relevant variables, from supplementation, to sleep, to diet, and so on.

The first phase, which consisted of the Cases below, was aimed at examining the effects of various supplementation protocols. As I’ve mentioned before, it was not subtle. I just threw a lot of supplements into my diet to see if you could make tangible, material, and even measurable changes to your gut health and overall health and well-being.

I think I’m well along in answering that as you can see in the completed experiments and posts below.

That answer is, oh yes, yes you can.

The biggest development was I finally completed and posted my results from the Prebiotic-Probiotic Case, “Prebiotic Probiotic Combination – Real World Results and Impressions.” If you haven’t already, I would encourage you to read that.

The second biggest development was my test results came back from my Prebiotic Case. There are some really interesting results in this one, and some important conclusions I think I can draw, particularly about regarding how I am going to want to expand the testing period for some of these experiments as it appears changes continue to accumulate with time.

On to this past week:

I had gone completely supplement-free towards the end of the prior week, and continued on with that through this past week. No probiotics, no prebiotics (with the exception of psyllium, explained in the Prebiotic section below), not even yogurt.

How do I feel?

As I’ve been writing lately, not as good as I had been. This surprised me as I was not taking the supplements to necessarily feel better or address some complaint, but rather for general long-term health benefits and a curiosity to see what the laboratory testing would reveal.

But I do believe I felt “better” overall when I was supplementing. I know that’s not something you quantify and is wholly prone to bias and subjectivity, but I feel I would be remiss if I did not report on it. These kinds of impressions are simply going to be an inescapable element of these experiments.

I hope to wrap up this base case by the end of next week at which time I am planning on embarking on a different kind of case, involving a variable I have not addressed in these weekly SnapShots before because it’s not really been applicable, and that is alcohol consumption.

I rarely drink anymore, at least not regularly. I’ve had maybe one beer in the past two weeks. I actually really like beer, and alcohol in general, I’m just frankly really busy and it slows me down so I skip it.

It’s also considered not particularly helpful to your microbiota. For that reason I am going to start reporting on my alcohol consumption in the Diet section below.

In terms of testing for the effect alcohol can have on the microbiota, we’re in luck! I guess that’s the word for it. I’m going to be going on a short trip with some friends for a few days. These few days will involve relatively large amounts of alcohol.

Stay tuned, it could be an interesting one!

Past week’s details are below.

Not much to say this week! as you can see, I zeroed out everything. 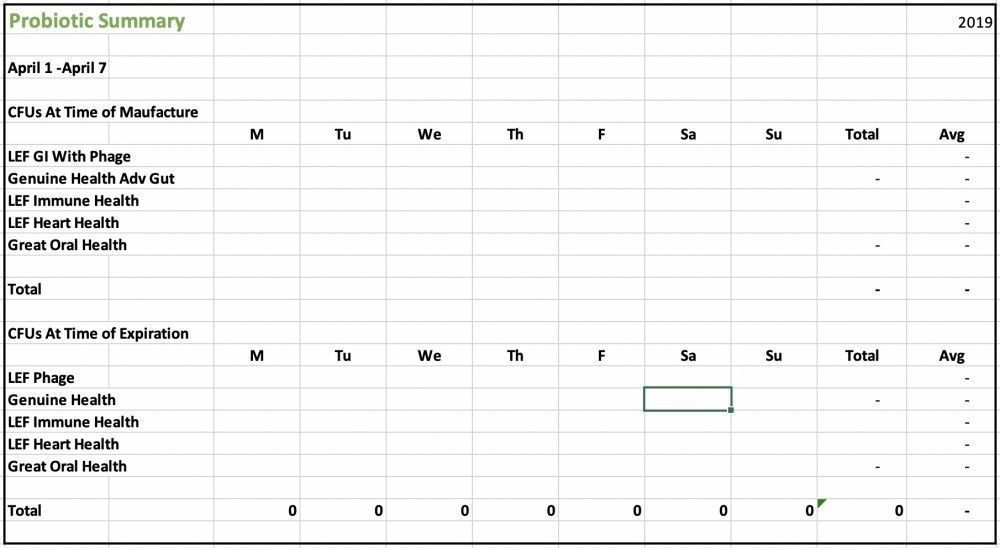 Likewise, I zeroed out all my prebiotic supplementation with one semi-exception.

I did not zero out the psyllium. While I argue (and I’m not alone) that it is a legitimate prebiotic, if a mild one, there are those who take a more traditional, narrow view of what constitutes a prebiotic and would take the other side of that argument. Regardless, I’ve been taking it for decades. It is as much a part of my diet as eating fruit and vegetables (which contain prebiotics naturally), so I don’t consider it supplemental, but rather a part of my “base case” lifestyle.

In contrast, I eliminated the LEF Prebiotic Chewable this time, which I highlight because I had not eliminated it in the initial Base Case. I had a weaker argument for that, mainly that I had been taking it for a while. But by a “while” I meant maybe a couple years, and I had to take into account that xylooligosaccharide (XOS) is a one of the more modern, but also less controversial, prebiotics.

I ultimately came to the conclusion that a true “Base Case,” with zero prebiotics could not include that supplement, so I took it out.

It was only 1.4 grams, but I’m trying to be as accurate as possible. 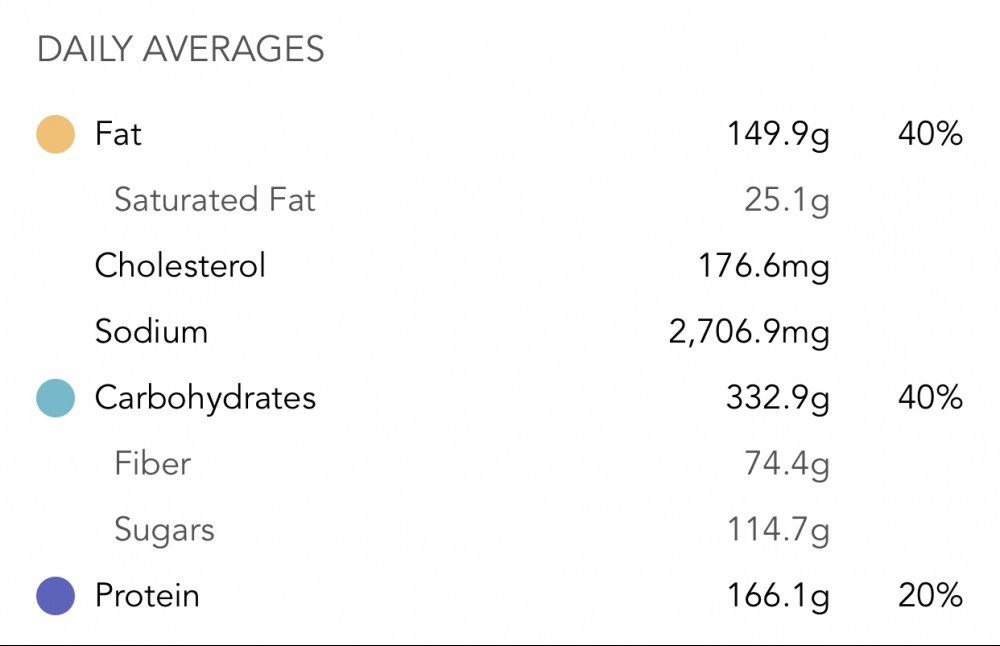 Macro components were nearly spot-on with last week’s. Fiber was a little lower, likely a reflection that I was still in the process of phasing out the prebiotic fiber the previous week.

My fat intake remains more plant based than animal based (by a little, and maybe not even that this week), with nuts and seeds and plant oils. Close to half my protein comes from shakes and bars, and consists primarily of whey, casein, and various plant-based combinations including soy, brown rice, hemp, and even some pumpkin. I do eat meat most days. This week was primarily chicken and fish, and while I did not eat any beef, I did have a surprising amount of sausage and lunch meat (some turkey, bacon, kielbasa, and breakfast sausage), which might explain the one percent uptick in fat intake for the week!

I continue to consume decent amounts of blueberries, blackberries and raspberries amounting to between a 1 and 2 cups in total. I really need to diversify my fruit intake, but you can do worse than berries! I also have at least one large salad in the afternoon and vegetables with dinner and lunch.

Managed to exceed my admittedly arbitrary target of 6 hours and 40 minutes. I need to get more, but this is what is realistic for me right now.

My target is to average a caloric expenditure of between 2750 and 2850 calories a day. I was well within that range this past week, and held pretty steady from the week before.

As a reminder, I am a group fitness instructor and personal trainer (part of my health, fitness, and wellness business). I remain otherwise active and pretty high energy, walking our dog, playing with my son, and as a rule rarely sitting for very long in one stretch.

Weight continues to bounce around in a pretty tight range. Had an unusual bump mid week, but that might have been the kielbasa!

I don’t typically weigh myself on weekends, given that my schedule is usually less structured and so it can be difficult to get a valid weight measure at the same time, under the same circumstances.

Thanks for your time! I’m going to hold it at zero supplementation, through the following Friday (tomorrow, as I write this, running a little late this week) and send my sample in for this second Base Case. That will be immediately followed by my Alcohol Case, which should run only a few days!

More on that later.

An as always, please leave any comments or questions below!